This Northumberland ham broth recipe is perfect for enjoying on a cold night. Discover how to make this traditional recipe from North East England.

What could be more comforting on a cold night than a bowl of home made soup? This traditional Northumberland ham broth is perfect for a cold snap. Many homes across the North East serve this on a Friday night.

The soup takes a while to make, filling the house with a lovely aroma. Serve with crusty bread for an ideal winter warmer.

Food from North East England tends to be filling and cheap to make. Men working on ships or down a pit need food to fuel them for the hard work ahead.

The main source of meat was pork. This is cheaper than beef or lamb. A ham shank could always be found on the table for making sandwiches with pease pudding. It is not surprising that Northumberland ham broth is made with ham. It also contains grated vegetables and lentils.

The end result is a broth that is so thick you can stand your spoon up in it. It makes a perfect filling meal for a winter day. If you like your soup thinner just add more water.

Broth is a soup made by simmering meat in liquid, often with the addition of cereals like pearl barley.

One of the more well known broths is Scotch broth. This is made by simmering mutton with pearl barley and vegetables for a filling meal.

Northumberland broth is different from Scotch broth as it uses ham as the main ingredient and is much thicker.

How to make Northumberland ham broth

Northumberland ham broth begins with a ham shank. Traditionally the shank would have a bone in it. These days most ham joints are boneless but they work  just as well.

If the joint is salty it is a good idea to soak it overnight and then drain the water. Most ham joints are fine to use without soaking.

Put the ham joint in water and bring to the boil. Boil for around three hours until the meat is starting to fall apart. The water should be a rich ham stock.

Take the ham out of the water and shred it. Add the ham back into the water with the lentils  and split peas. Grate the carrots, turnips and leek into the broth and simmer until the vegetables are soft.

Serve the Northumberland ham broth with crusty bread for a filling lunch.

Top Tip: Why not cook a larger ham joint and keep half for sandwiches or to make a roast ham. 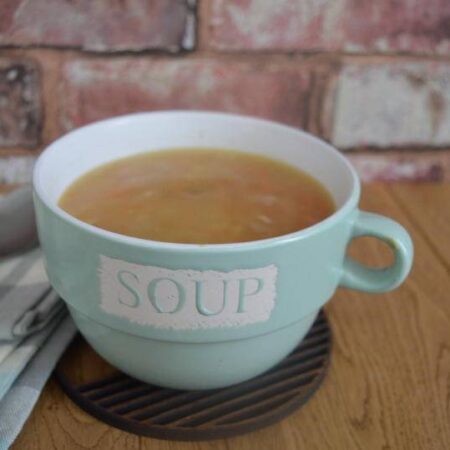 Serve with crusty bread. Tip:  Why not boil a larger ham joint and use half for soup and the other half for sandwiches or a roast glazed ham?
Keyword soup

Can I make ham broth in the slow cooker?

Yes you can. You might want to boil the ham in advance to make the ham stock. Alternatively use pre-cooked ham and add ham stock into the slow cooker with the vegetables. You will need to cook for around five hours so the lentils and split peas go soft.

How long will the ham broth keep?

The ham broth will be fine for two or three days kept in the fridge. Normally it will not last that long as it tends to get eaten quickly.

Can I freeze ham broth?

Yes ham broth will freeze well. Make sure it is properly cool before placing in the freezer.

It is a good idea to freeze the broth in batches of different portion sizes so you only need to defrost as much as you need. Freeze the portions in plastic containers to make it easy to store in the freezer.

How do I know if my ham is salty?

You might be wondering how to know if the ham is salty before you cook it.

If you live in the UK you probably do not need to soak the ham. Most gammons have a mild cure. It is a good idea to read the instructions on the ham shank and follow the advice there.

If you are still not sure just cut a small piece from the ham joint and boil it for a few minutes until cooked. Taste the ham and you can see how salty it is.

If you live in the US then the hams tend to be cured in salt which makes them very salty. Soak the ham for 48 hours, changing the water every eight hours.

Northumberland broth is a good way to use up left over ham. When you boil a ham keep aside the ham stock and freeze it. This way you can make the broth whenever you fancy it.

Have you ever made Northumberland broth before? Let me know below.