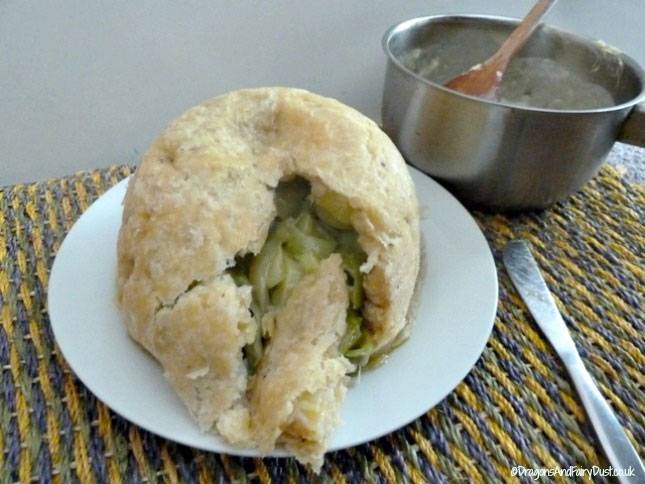 Leek pudding is a savoury pudding which is traditionally made in North East England. A satisfying dish perfect for a cold day.

Suet puddings are a common to British cooking. These puddings are made from suet and boiled or steamed. Whilst a pudding is normally a dessert or sweet dish like St Stephen’s pudding or Newcastle pudding, savoury versions exist as well.

Whilst on the hunt for local North East recipes I kept coming across mentions of leek pudding. I had to find out more. This is a traditional Geordie dish that probably dates back to the 18th Century. It was served as an accompaniment to stew, mince or just with gravy.

What is Leek Pudding?

Leek pudding is a savoury suet pudding and there are two ways to make it. The first way wraps leeks inside a casing of suet pastry so they tumble out when you cut the pudding. The second way mixes the leeks into the pastry. . To cook both versions you need to steam the pudding in a bowl until it is ready.

As with many local recipes there are other variations which include adding cheese or bacon into the pudding with the leeks to add a different flavour. Whatever variant you choose the common ingredients are suet pastry and leeks.

I chose to make the first variant, making a suet pastry to enclose the leeks.

It is appropriate that leek pudding is a recipe from North East England. Leeks are often grown on allotments and a prize for the best leek is often a coveted award at village fairs. Leek growing can be a very serious business with the secrets for prize leeks handed down from generation to generation. Rivalry is intense. There are stories of leeks being destroyed and people sleeping on their allotments to guard their prized leeks from harm.

A steamed pudding is a fitting way to serve leeks, giving them a place of honour on the table. The little sign in the picture I won from Geordie Gifts who create unique gifts from the North East. It seemed appropriate to use it in the photo.

It is not surprising that this dish was also popular during the Second World War. During the time of rationing filling meals would make limited food stretch further. Most people grew their own fruit and vegetables to help supplement their rations.

Leeks are a forgiving vegetable that are easy to grow. Good in many different recipes they are in season from September to May. Leek pudding was the perfect meal for the wartime cook especially in the winter months when not many vegetables are in season.

How to make leek pudding

To make the leek pudding first make the suet pastry Mix the flour and suet with mustard and pepper. This will make the pastry slightly spicy to complement the leeks. When the pastry is the right consistency roll it out. Grease a pudding bowl and use the pastry to line it. Remember to keep aside enough pastry to use for the top of the pudding.

Chop the leeks and toss them in melted butter. Add some salt and pepper for seasoning. Put the leeks into the bowl inside the pastry. Top the pudding with the remaining pastry.

To cook the pudding steam it. Cover the pastry top with greaseproof paper. Add tin foil on top of this and tie it with string. This will prevent the top getting wet and going soggy. Put the pudding basin into a bowl of water and bring to the boil. Steam the pudding for a couple of hours, making sure you keep an eye on the water level.

When ready turn the pudding out onto a plate. It will keep its shape and smell delicious. When you cut into the pudding the leeks come tumbling out, their delicate green colour a lovely contrast to the pastry. If you are not expecting them it is a surprise.

Steaming the pudding in a cloth

As well as steaming the pudding in a pudding basin you can steam the leek pudding in a cloth or clootie. Traditionally the whole meal would have been cooked in the same water. Meat and other vegetables would boil in a string bag on the stove.

To steam the leek pudding in a cloth put the leeks on the rolled out pastry. Pinch the edges together making sure that the leeks are sealed in. Wrap the pudding in a damp floured cloth. Put the cloth in a pan of boiling water and boil for around two to three hours.

Can I cook leek pudding in the microwave?

What to serve with it

Leek pudding is a filling and satisfying dish and served with white sauce was the ideal accompaniment to a Sunday roast. It makes it look like you have made an extra effort to impress. Leek pudding is also perfect with mince, stew or just gravy.

Leek pudding should be better known, it is a great way to serve vegetables. 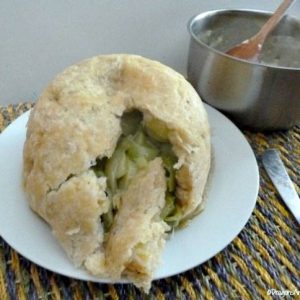 Leek pudding is often served with mince, stew or just gravy. It is a very filling meal so perfect for a cold day
Keyword leek

Have you ever tried traditional leek pudding? Let me know below.

Other leek recipes to try

Feeling cold? Leek and potato bake is a delicious creamy meal which will warm you up and leave you feeling full. Find other ideas for recipes to cook with vegetables that in in season in February as a bonus.

Get the recipe: Leek and potato bake

While it takes a little while to make it is worth the effort. This leek and lamb cobbler is a delicious hearty meal.

Get the recipe: Leek and lamb cobbler