Newcastle pudding is a traditional steamed pudding with a topping of cherries. Serve with custard for a lovely dessert on a cold day.

I am finding it really interesting finding out about regional recipes. Britain is a small island but the range and diversity of the dishes we have across the length and breadth of it is amazing. It is like our range of accents, unique to each region and distinctive. Even when two regions have a similar recipe, there are subtle variations that make it specific to that area.

Recently I have been concentrating on traditional recipes from North East England. These often have musical names like Pan Haggerty or Singin’ Hinnies which reflect the lilting Geordie accent.

Whilst looking for other recipes from the region I came across a reference to Newcastle Pudding. Intrigued, I had to find out more.

The earliest reference I could find came from The Cook and Housekeeper’s Dictionary by Mary Eaton in 1822. The basic instructions were as follows:

NEWCASTLE PUDDING. Butter a half melon mould or quart basin, stick it all round with dried cherries or fine raisins, and fill it up with custard and layers of thin bread and butter. Boil or steam it an hour and a half.

Investigating further it seems Newcastle Pudding is also used to refer to a lemon bread and butter type pudding and also a steamed sponge pudding with almond essence.  It is also an alternative name for cabinet pudding which is a pudding made with bread or cake in custard

I decided to try and recreate the steamed pudding version. Now the autumn is here there is nothing nicer that a steamed pudding with custard. It makes you feel warm inside, ideal when the wind is howling round the house. The result was a success, it has a lovely taste and is a light steamed pudding with the cherries giving it a touch of sweetness.

The cherries make a lovely pattern in the top of the pudding so it would make a great centrepiece for a special occasion. It is a perfect pudding for spring days when the sun is out but the air is still cold. Eating this makes you feel warm and the pudding is not too stodgy. It is almost similar in texture to St. Stephens Pudding, another steamed pudding this time with an apple base.

I must admit to being quite pleased that Newcastle has it’s own pudding and a very tasty one at that. I will definitely be trying this one again soon, taking more care to grease the pudding basin properly beforehand.

How to make Newcastle pudding

Newcastle pudding is easy to make.  First grease a pudding basin with some butter or margarine. This allows you to remove the pudding from the basin when it is cooked.

Chop the cherries in half and use them to create a decorative pattern in the top of the pudding basin.

Cream the butter and eggs together and then beat in the eggs. Gradually mix in the other ingredients and add milk until the pudding has a dropping consistency.

Pour the mixture into the pudding basin

Place some silver foil over the top of the pudding basin and tie tightly with string.

Put the basin in a pan, add water until the level is half way up the bowl and bring to the boil. Simmer for a couple of hours until the pudding is cooked. You will need to keep an eye on the water level to make sure it does not get too low. Top it up as needed.

Let the pudding stand for five minutes and then turn it out onto a plate. You might need to use oven gloves. 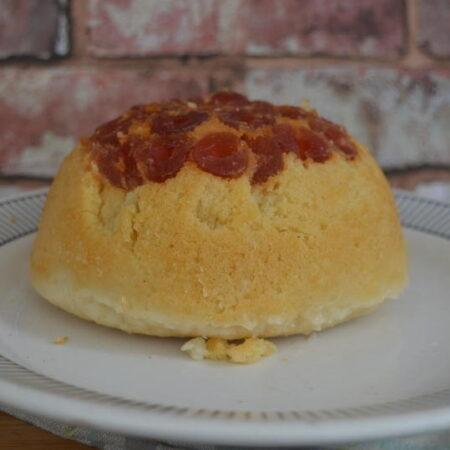 Have you ever made this pudding? Let me know below.

Previous Post: « Everything You Need to Create a Chill-Out Space
Next Post: Planning for Christmas and Giveaway »