The Olympic Torch is in Newcastle

Today it is rather a wet and windy day, the heavens have opened and it is pouring down. I took the dog out for a walk this morning and both of us have arrived back soaked. As well as being wet and miserable today a light of a different sort will be entering the region. It is the day that the Olympic Torch arrives in Newcastle Upon Tyne.

In a tradition that goes back to the times when the Olympic games first started in Greece the Olympic torch burns continually throughout the Olympic games. The torch is lit in a speciall ceremony in Greece from the sun’s rays at the Temple of Hera in Olympia. It then goes on a short relay around Greece before it is handed to the host nation.  When it arrives in that country it travels around being passed from one torch bearer to another before arriving at the Olympic stadium and lighting the Olympic cauldron in the official opening ceremony.

Today the torch continues its journey from Alnwick castle where it was yesterday, and will arrive in Newcastle around four this afternoon. It will be travelling around North Tyneside first and my son is going to see it with the school when it arrives in Whitley Bay. They have to be there an hour before the torch arrives so I can imagine that he is going to be rather wet and cold. I have dispatched him with his camera so hopefully he can get some decent photographs.

The torch will then travel into Newcastle where it will tour around the city centre, stopping off to visit St James Park, home of Newcastle United. It will then make its way down the the Quayside and in an exciting end to its journey for the day Bear Grylls is going to carry it down a zip wire from the top of the Tyne Bridge to the Gateshead side of the Quayside below. 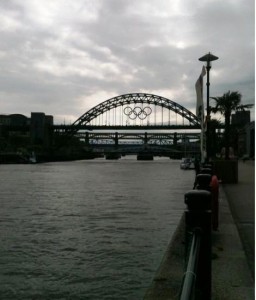 As you can see from my photograph the Tyne Bridge is bearing the Olympic circles in preparation for the event. You can also see that it is quite a long way to travel and I really hope the weather improves for him. He should be doing his amazing slide around seven this evening so look out for it on the television. Celebrations are planned along the Quayside later so it should be quite a night. It is fabulous to be part of an historic event.

The Birthplace of Thomas Telford

2 responses to “The Olympic Torch is in Newcastle”