Whitley Goose is a traditional recipe from Whitley Bay which has nothing to do with geese. It is a simple dish of boiled onions mixed with cheese and cream.  Serve it alongside a roast dinner as a side dish or with bread as a simple tasty supper.

It reminds me of another traditional Northumberland dish, Pan Haggerty which is more filling due to its use of potatoes.

I would love to know more about the origins of the name, Whitley Goose. I am sure there must be a colourful story behind it.

Whitley Goose may be a local variation of a Mock Goose recipe. The idea behind Mock Goose is to create a tasty but cheap dish that will make you think you are dining in style. There are mentions of it in cookery books as far back at the 1740’s. Most of the recipes use sausage meat or liver with potatoes and sage in layers in a dish which is baked in the oven.

Mock goose became popular during the Second World War, when food rationing made it difficult to get meat. There are two variants of the recipe, one which uses lentils and the other uses potatoes, apples and cheese. This page lists these mock goose recipes.

Where is Whitley Bay?

Whitley Bay is a coastal town overlooking the North Sea, not far from Newcastle. When I first came to Newcastle I used to hop on the metro at the weekend and go for a wander along the coastline. There is a stretch of golden beach that runs to St Mary’s lighthouse in the North. When the tide is out you can walk across and visit the lighthouse. My son spent many a happy hour investigating the rock pools when he was a child.

Nearby you will find Whitley Bay Caravan Park which is a good place for a holiday.

If you walk to the South you pass the iconic dome of Spanish City, immortalised in the Dire Straits song “Tunnel of Love”. Originally built in 1910 as a concert hall and tearoom it became a funfair. Sadly it stood empty for eighteen years. Recently it has been brought back to its former glory and contains restaurants, tea rooms and event spaces.

Further along the coast, past Cullercoats you reach Tynemouth and the ruins of the castle and priory overlooking the sea. There are plenty of shops to pop into and fish and chips in the sea air are always welcome.

How to make Whitley Goose

The Whitley Goose recipe is really simple and quick to make.

You need the following ingredients to make this savoury cheese and onion dish.

You can chop the onions before boiling. They will cook more quickly and there is no risk of burning your fingers when chopping them. 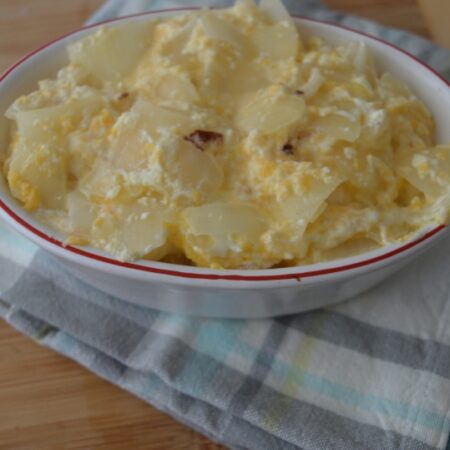 This is a savoury dish of cheese, onions and cream which makes a lovely side dish with a roast dinner. It is also nice with crusty bread for lunch
Print Recipe Pin Recipe
Prep Time 20 mins
Cook Time 35 mins
Course Side Dish
Cuisine British
Servings 4 people

Have you ever tried this dish? Let me know below.