Last weekend we visited Segedunum Roman Fort. Segedunum is located in Wallsend, literally at the end of Hadrian’s wall. The fort itself is the most completely excavated fort in Britain and was a garrison for Roman soldiers for around 300 years. There is also a museum and a reconstructed Roman bath house on the site. We previously visited a few years ago when the Connecting Light Exhibition was on and messages were being transmitted via large lights along the length of Hadrian s Wall. We used to go all the time when my son was younger, I have some lovely photos of him practising his archery with a Roman soldier. This time we went to see the Power & People exhibition which is the UK’s largest exhibition of Roman artefacts. It is on loan from the British Museum and had been touring the country. It finishes its tour in Segedunum and will be there until the 15th September. To celebrate the launch this weekend there was a Mercatus – a Roman Fayre along with Roman soldiers, cavalry and belly dancers, so it was an interesting visit.

Segedunum is easy to access, it is just off the main road and three minutes walk from Wallsend metro station and bus station. There is car parking in front of the museum. Entry is £5.95 for adults and children under 16 are free.The museum is dominated by the viewing platform towering over it which overlooks the Roman site. The remains of the fort can also be seen though the fences as you walk towards the museum, with the River Tyne and the Wallsend shipyards in the distance.

Entering though the doors leads you into a gift shop with access to the museum and fort site. We were greeted by a very tall lady offering us grapes. After paying for entry we decided to visit the fort and the mercatus first as the Roman cavalry was about to arrive.

The fort is accessed by entering the museum and then going outside. There is a short walk to the Roman excavations. On the way to the fort there is this stone which marks the easternmost point of Hadrians wall as well as other small sections of the wall.

The remains of the fort are easy enough to walk around and cover quite a large area. Each of the different sections are labelled so it is easy to tell what all the different sections were for.  There is also information about what the fort must have looked like when the Romans were in occupation, which was really interesting. My son was fascinated and kept telling me which part of the fort we were in and what it was used for.

The Roman bath house is situated at the corner of the fort and is worth a look in. When we visited part of the Roman fayre was taking place inside so there were lots of stalls.

My son was really interested by the Roman toilets. The bath house is a full reconstruction of the bath houses used in Roman times and was fascinating. 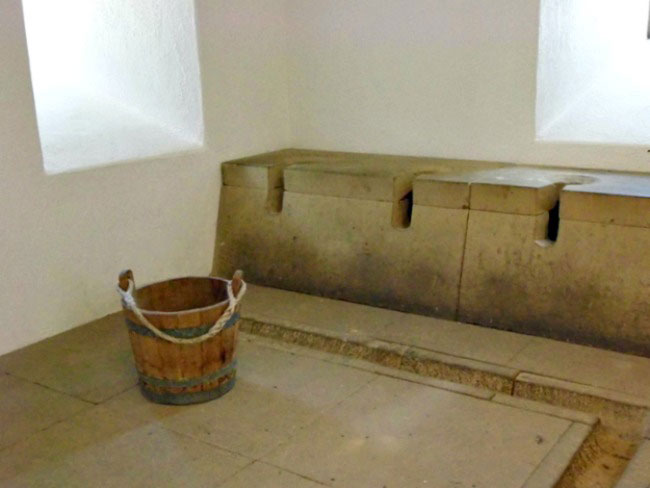 The mercatus was set up along the side of the Roman fort and in the bath house itself. It was a mixture of stalls selling Roman costumes, shoes and weaponry and food and cake stalls. Romans tended to the stalls encouraging you to buy their wares. We bought some fudge, there were plenty of different flavours available making it hard to choose.

The Roman soldiers congregated at the next stall, checking out the sandals and other goods deciding if they should buy.

My son was fascinated by the hog roast, amazed that a whole pig was actually being cooked. I had to buy him a hog sandwich which he really enjoyed.

I was fascinated watching the potter at work. He turned the wheel with a stick every so often and then formed the pot with his hands. The pottery he made was in authentic Roman style.

We had arrived in time for the Roman Calvary and we listened to a fascinating chat about the different armour and weapons used in Roman times. The different styles of helmets and weapons were demonstrated, it was really interesting. Just as we were leaving the belly dancers arrived so we stopped for a bit to watch them.

We then went inside the museum to visit the Power & People exhibition. As well as this exhibition Segedunum has a number of other exhibits which show life in Roman times. There is also a whole gallery devoted to the industrial heritage of the area with artefacts from the ship building and coal mining days. It is fascinating to wander round and look.

The Roman Empire: Power & People brings together over 160 pieces from the British Museum. There are sculptures, coins, jewellery and writing tablets. There were even some examples of Roman clothing which were really well preserved. As well as the artefacts there are interactive exhibits showing how the Roman empire moved across Britain. It is a really fascinating exhibit and well worth a visit.

Before we left Segedunum we had to go up to the viewing platform to see the fort from above. I recommend taking the lift up, there are rather a lot of stairs. The view is worth it, as well as the views of the fort below you also get to see the Wallsend shipyards and the river.

Visiting Segedunum was a lovely way to spend a day and my son really enjoyed the visit as well. He learnt lots of facts about the Romans and is still telling me things he picked up while he was there. It is worth checking the website before visiting as they have plenty of events on and you can plan your visit to coincide. It is also worth a trip along Hadrian’s Wall to visit the many forts along its length. We visited Housesteads Roman Fort a while ago and it was fascinating.

A day out at Flamingoland

HMS Illustrious Returns To The Tyne