A visit to the SS Nomadic, Belfast

SS Nomadic is a former tender of the White Star Line. Her job was to transfer mail and passengers to and from the RMS Titanic and RMS Olympic.

Last Summer we made a trip to Northern Ireland and while we were there we went to Titanic Belfast. The Titanic Experience is a must visit attraction which shows the history of the Titanic. You learn all about the social history of Belfast and the building of the Titanic. There is the opportunity to explore the shipyard, see inside the Titanic and learn all about her sad demise and the circumstances surrounding it. It is a haunting exhibition and you can easily spend a few hours soaking up the history.

Entering Hamilton Dock you catch the first sight of SS Nomadic. It is chilling to realise that the SS Nomadic was built alongside RMS Titanic almost 100 years ago.  The ship uses same design as RMS Titanic but on a smaller scale. The quality workmanship that went into making her is visible from the outside.

Stepping aboard is like walking back in time. Walking across the gangplank you can almost imagine the excitement of the  first and second class passengers when boarding. The SS Nomadic transferred these passengers from the dock at Cherborg onto the Titanic. It was the first taste of the luxury they would enjoy on the voyage ahead. Fortunately they were unaware of the tragedy that would unfold on the Titanic’s maiden voyage. 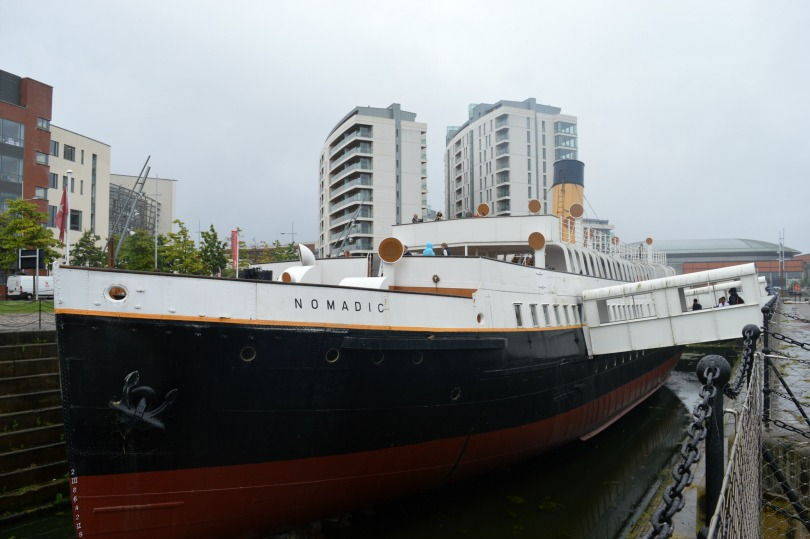 It is worth making a mention of Hamilton Dock the berth of the SS Nomadic. This is a dry or graving dock which was part of Harland & Wolff shipyard.  For over 120 years the Hamilton dock was used in repairing, maintaining and fitting out ships. In the 1860’s shipbuilding in Belfast was a thriving industry and many ships were built here including the Titanic. The SS Nomadic was probably fitted out in Hamilton dock.

The dock fell into disrepair in the 1990’s but was restored in 2009 alongside the restoration of the SS Nomadic. It is fitting that the SS Nomadic is berthed here as a reminder of the ship building heritage of the city.

Inside the SS Nomadic

Entering the SS Nomadic takes you on a journey into the past. Not only did the SS Nomadic transfer passengers onto the Titanic but it played an active part in both World Wars. The SS Nomadic worked as a mine sweeper as well as evacuating many people from Cherborg harbour. Inside the SS Nomadic you will find an interactive experience that explores her varied past.

After boarding via the gang plank you enter into the bar area. The wooden panelling gives a luxurious and decadent feel to this area. Linger for a while and listen to the story of the barman, shown in film in the background or just sit in a White Star Line seat and soak up the history. You can almost imagine the rustle of old fashioned dresses passing by and the clink of tea cups as the passengers wait on the journey to board the Titanic. The detail in the ceiling and panel  walls speaks of the days of when people took pride in their craft. 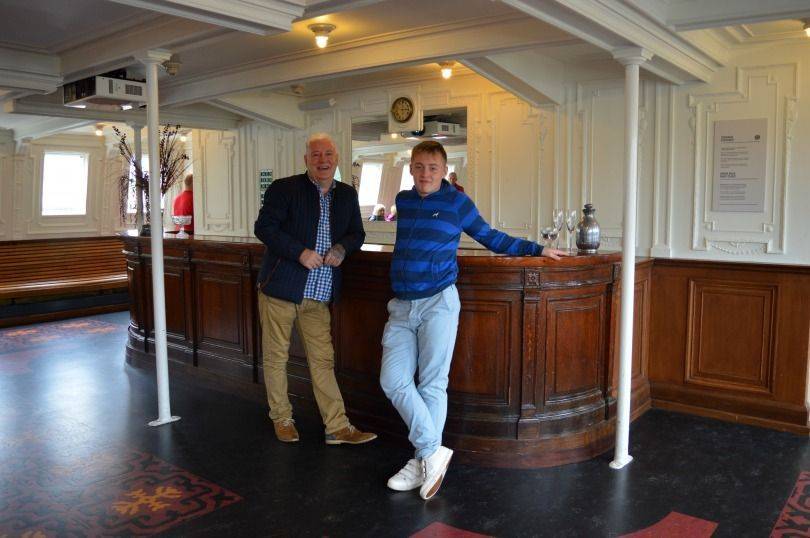 Walking around the SS Nomadic you get a real sense of history. Little details like the suitcases on the luggage rack take you back in time. The displays are fully interactive giving you information about the ship as you progress round it.

Many famous passengers have been aboard the SS Nomadic. Benjamin Guggenheim and American socialite Molly Brown were on board to join the Titanic’s maiden voyage. Molly Brown later became known as the unsinkable Molly Brown after helping others into lifeboats and helping to row the lifeboat she was in. Charlie Chaplin, Elizabeth Taylor, Richard Burton and physicist Marie Curie have also been among her passengers. You can learn more about some of the passengers as you walk round the SS Nomadic. There is also the opportunity to go back in time and dress up in the clothes of the day. 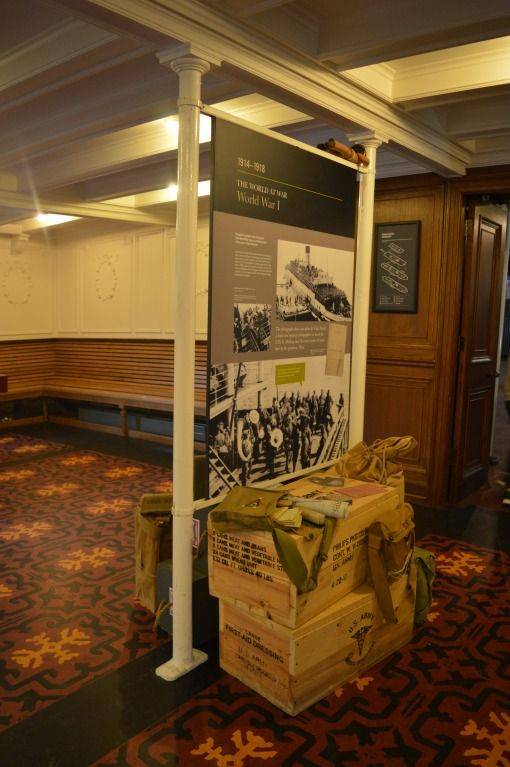 There are four decks of history to explore on the SS Nomadic. The crew quarters are a stark contrast to the luxurious passenger areas. Tiny and cramped these areas exude atmosphere and you can imagine the crew relaxing briefly between hours of work. There is also an area where you can see the inner hull of the SS Nomadic and see the rivet work close up. This area also tells the story of the construction of the ship with plenty of interactive exhibits.

On leaving the SS Nomadic we noticed a rather odd looking vessel at the other end of the dock. This is the caisson gate, a hollow vessel made from wood and steel. It acts in a similar way to a lock gate on a canal.  When a ship enters the dock the caisson is filled with water and used to seal the gate of the dock. The pumps can then remove the water from the dock while the ship is worked on. Once the work is finished the caisson is pumped dry, water let back into the dock and the ship can leave.

This Caisson gate  is the original one from Hamilton Dock and sealed the dock for over 130 years. It was originally built by Harland and Wolff and is probably the oldest Harland and Wolff vessel in the world. Another gate seals the dock now whilst this gate stands proudly in its home. 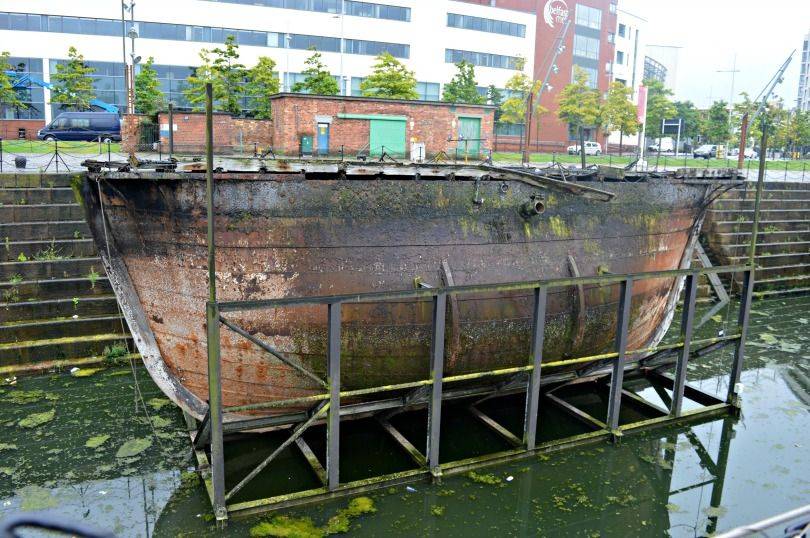 The SS Nomadic is a really interesting place to visit and if you are visiting the Titanic Experience it is worth the walk across to see it. It may look small from the outside but inside there is plenty of history to take in. It really gives you a feel for what it must have been like on the Titanic as well as giving you an insight into some of the survivors stories. I am glad we took the opportunity to explore the SS Nomadic on this trip to the Titanic Experience.

If you are looking for other things to do in Belfast it is worth visiting the Crumlin Road Gaol which is a fascinating insight to life in prison.

Have you ever been to the Titanic Experience or SS Nomadic? Let me know below.

A holiday at Butlins, Skegness

Game On at the Centre for Life

Soul on Sunday at Revolution Newcastle

Staying at YHA Once Brewed

4 responses to “A visit to the SS Nomadic, Belfast”