A visit to Souter Lighthouse

There is something atmospheric about lighthouses. Vital for the safety of ships in bad weather, they often stand on isolated promontories or rocky outcrops in the sea. At night they send their coded flashes across the water, warning of rocks and acting as an aid to navigation. When it is foggy their foghorns pierce the gloom, keeping ships off the rocks. The life of a lighthouse keeper must have been an isolated and hard life. Staying on the lighthouse night after night, making sure everything worked smoothly. Often alone, their only contact with civilisation was when a boat came to bring them supplies. Many old lighthouses are not in use any more but remain on the coast as a reminder of Britain’s naval and shipping heritage. Souter lighthouse is one of these, it was opened in 1871 and is located on the South Shields coast near Marsden. Standing on cliffs at Lizard Point it’s red and white hoops make it instantly visible. It kept ships off the reefs at Whitburn Steel which was one of the most dangerous reefs in the country. It was also the first lighthouse in the world to be designed and built to use electricity to power the light. Whilst it was ahead of its time when it was built it has now been decommissioned, the use of satelite navigation and GPS meant it was no longer needed. 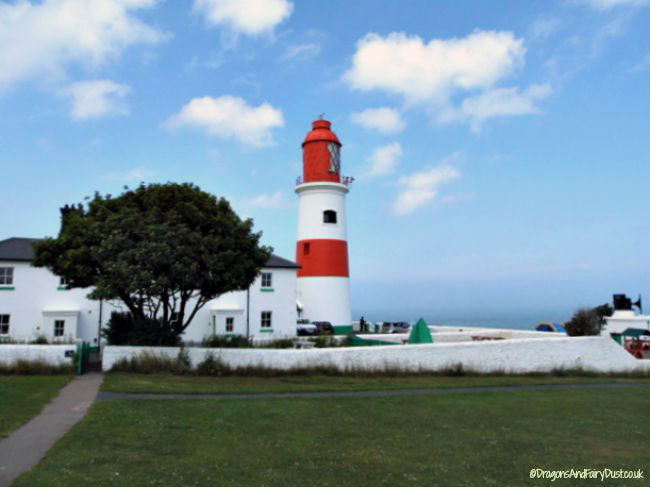 These days Souter lighthouse is owned by the National Trust and open to visitors. The lighthouse is a picturesque sight, its red and white colours look dramatic against the blue sky. Behind it there is a steep drop off the limestone cliffs to the beach. The cliffs are filled with nesting kittiwakes, cormorant and other birds who provide background sound. We visited Marsden to watch the Sunderland Air Show last year and wandered down to the beach which was a steep climb. Today we were content to visit the lighthouse and wander around. There was a beach barbecue going on in the field beneath the lighthouse. 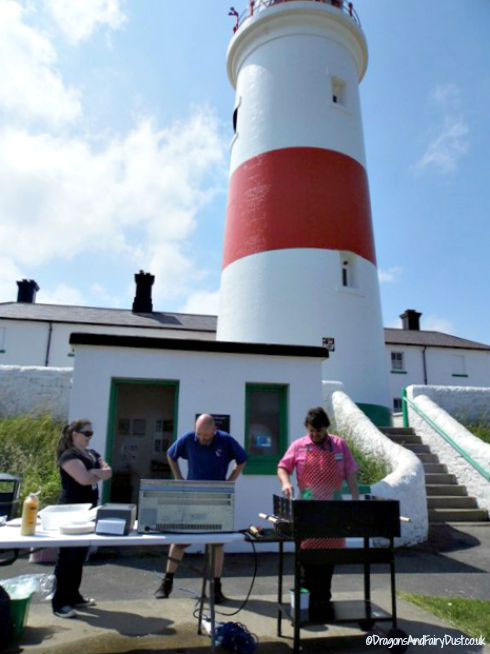 We bought some burgers and sat and eat them in the sun. There are plenty of picnic tables around the lighthouse, set to one side in walled gardens which offered the perfect place to get some sunshine. The dog watched hopefully in case we could spare some burger for him. 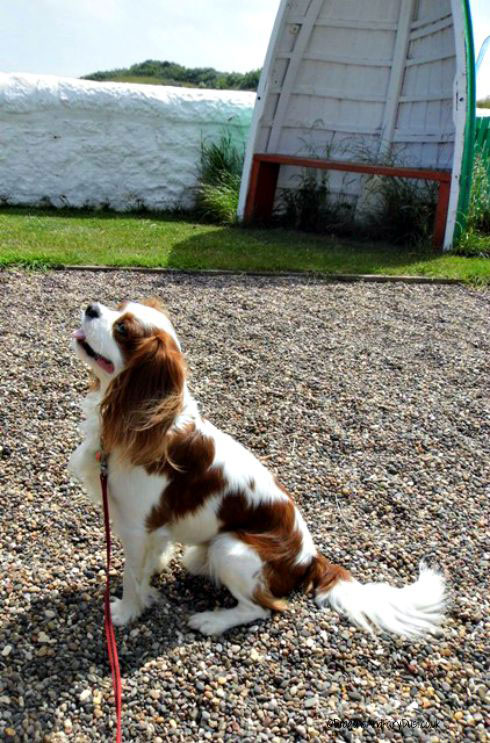 After eating we went down to the field to have a look round. There were other things going on, swing ball and bouncy castles were available in the field by the foghorn. The foghorn looked very impressive, I can imagine that it makes a very loud noise when it sounds. 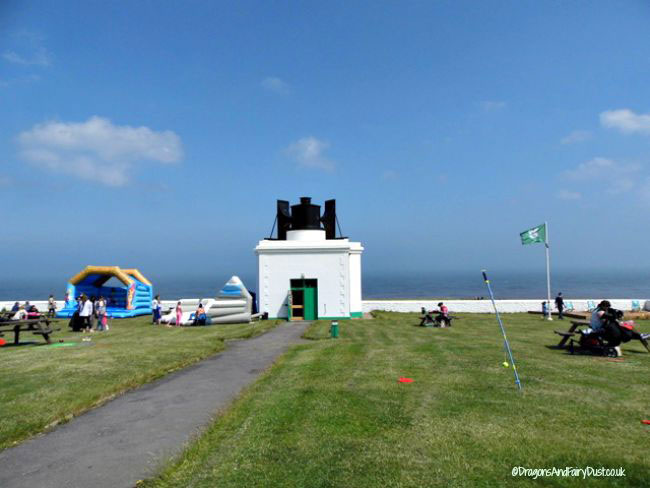 At the end of the field we came across a Punch and Judy show. My son was fascinated, he had never seen one before. We watched as Mr Punch tried to keep the sausages safe from the crocodile. 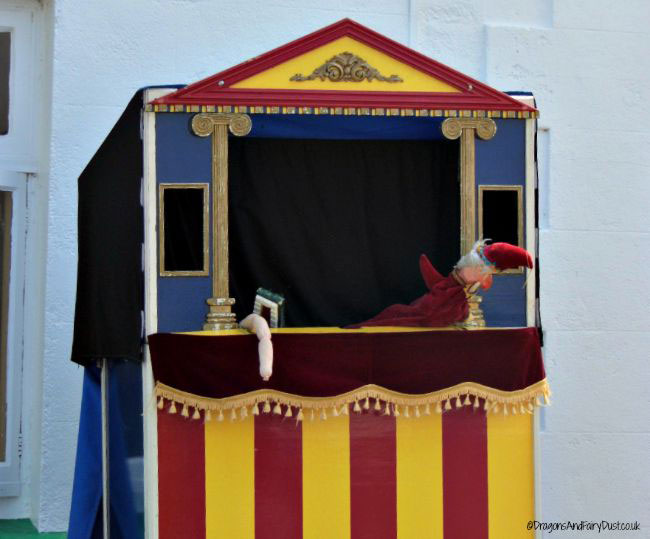 After watching the show we wandered back towards Souter lighthouse to have a look inside. I had visited many years ago and I knew that my son would be fascinated to climb up and see the light. 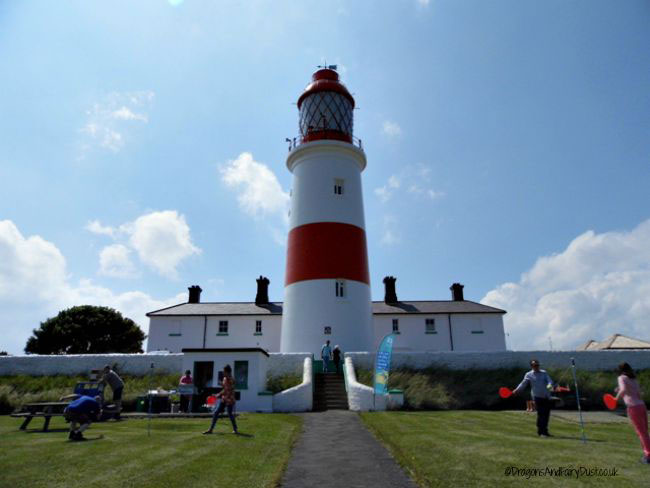 Entering inside Souter lighthouse is like going back in time. Everything remains as it was when the lighthouse was in use. There are large generators used to provide the electricity for the light which would have to be well maintained. If the light went off when it was stormy it could have been a disaster for the shipping. 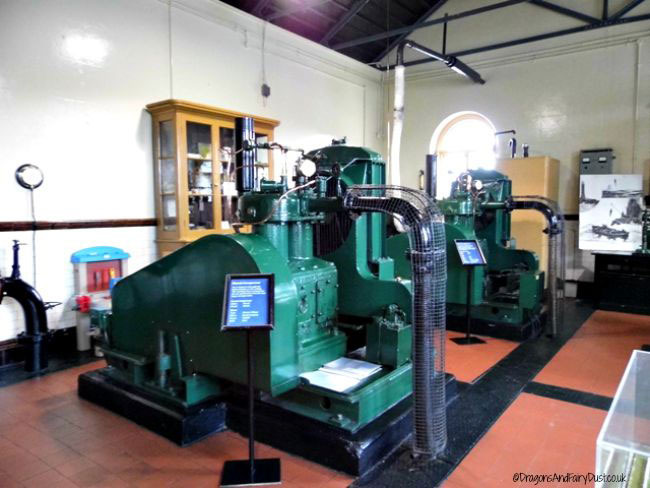 When I was young we used to watch Dr Who on a regular basis. One of the episodes was called The Horror of Fang Rock which is set in a lighthouse. The power is being drained from the light by a mysterious beast and the doctor has to investigate. Souter lighthouse put me in mind of this episode, the large generators, old fashioned radio room and the lighthouse keepers cottage are filled with atmosphere. I was waiting for the dark to fall and the fog to start swirling in. 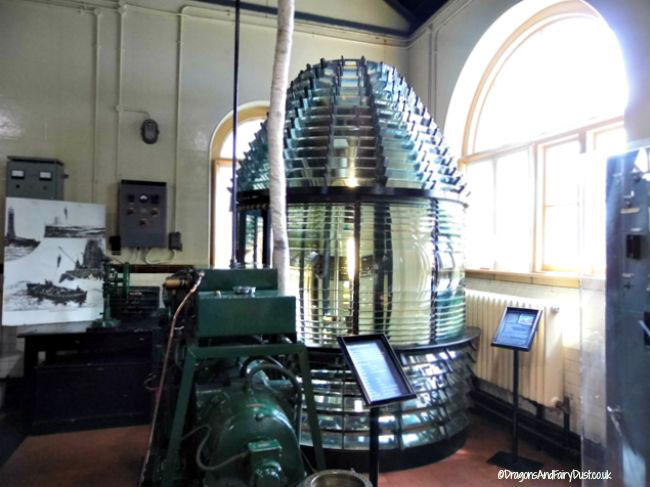 This was one of the first lights used in the lighthouse, as you can see it was huge. There is lots of interesting information round the lighthouse which tells you all about the history. There is also lots of information about our nautical heritage and objects from that time on display as well as an area with activities for children. I was fascinated by the ships compass and my son was impressed with the large array of knots on display. Imagine learning to tie all those. 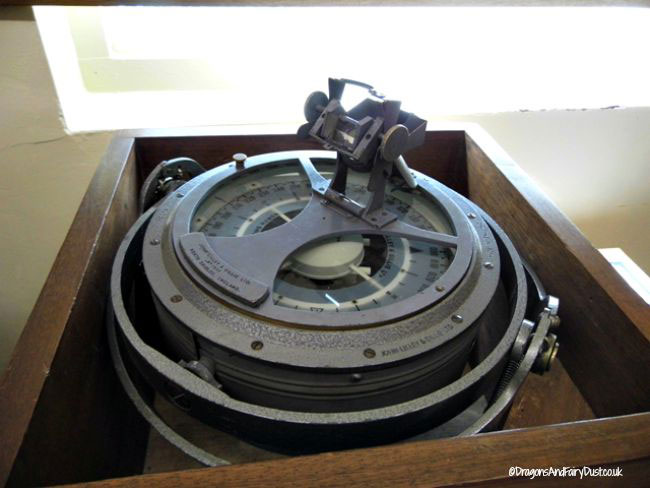 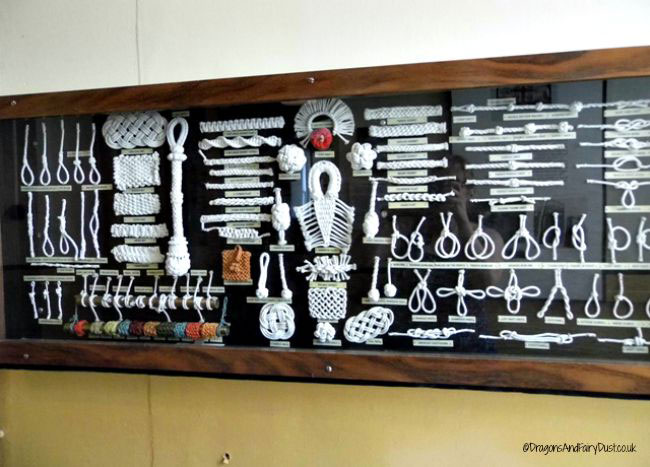 We lingered a while in the radio room, it was possible to imagine the shipping news and morse code transmissions filling the air. 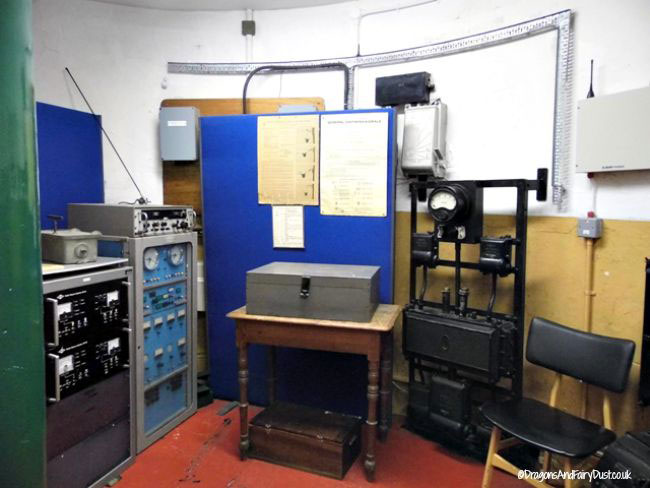 It was time to tackle the stairs and climb the lighthouse to find the light. Luckily I was wearing sensible shoes this time, unlike on my visit to Newcastle Castle where I wore flip flops. They are not the best shoes for tacking steps. The stairs are steep and narrow with only really enough room for one person to go up at a time. There are passing places on the way up. The spiral stairs stop at a landing and then to reach the light there is a wooden ladder. This is also steep. 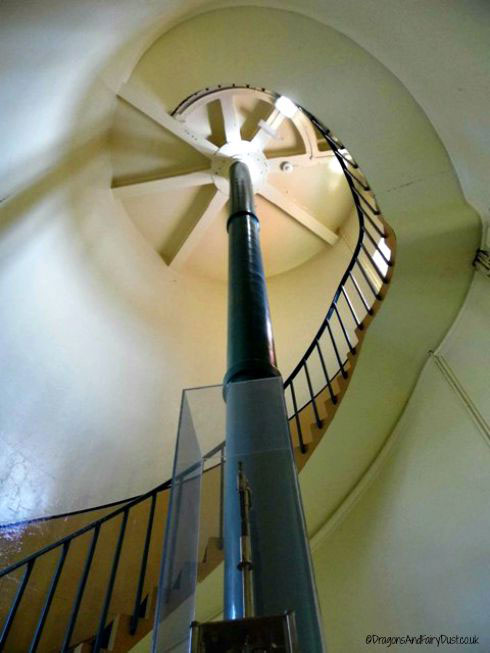 There is not much room at the top of the lighthouse. Most of the room is taken up with the light which is incredibly large. There is a small walkway around the light and you are able to look out though the window across the coast. The light must have taken a lot of work to make. 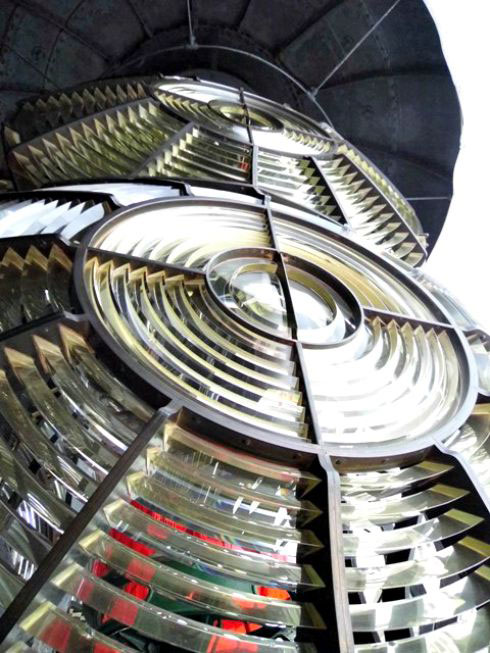 After we climbed downstairs again we visited the lighthouse keepers cottage. This gave a real feel for what it was like to live in the lighthouse, the rooms were small and cosy. Imagine having to do your cooking on this range. 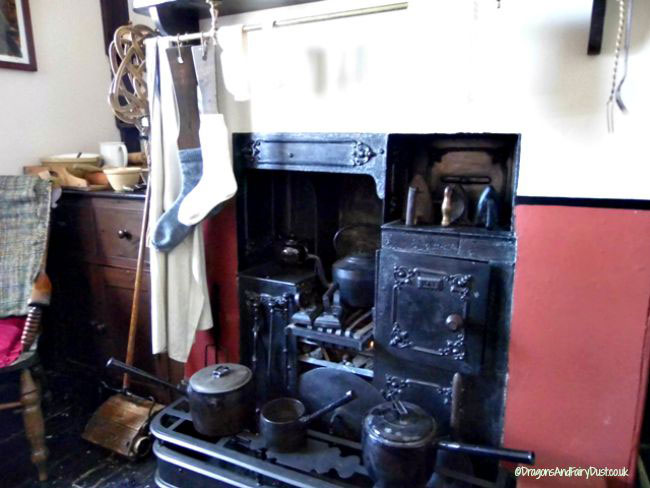 The yard had all the washing hung out, I am so glad that I have a washing machine and do not have to tackle washing with a washboard and mangle. 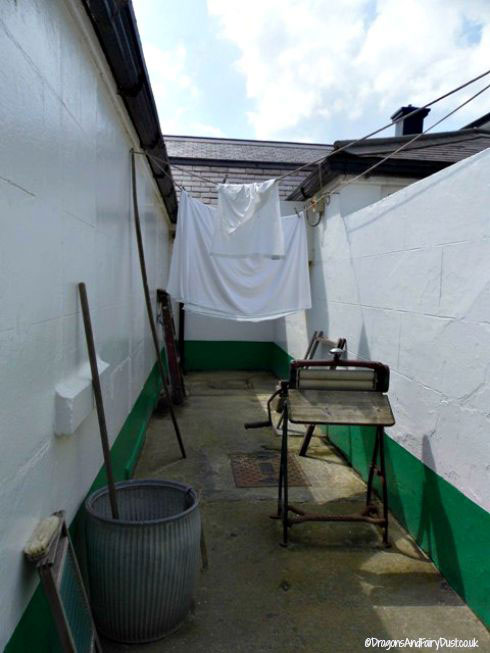 We really enjoyed our visit to Souter lighthouse, it is lovely to have a glimpse into the past and the life of a lighthouse keeper.  I took one more photo of this photogenic lighthouse as we left. 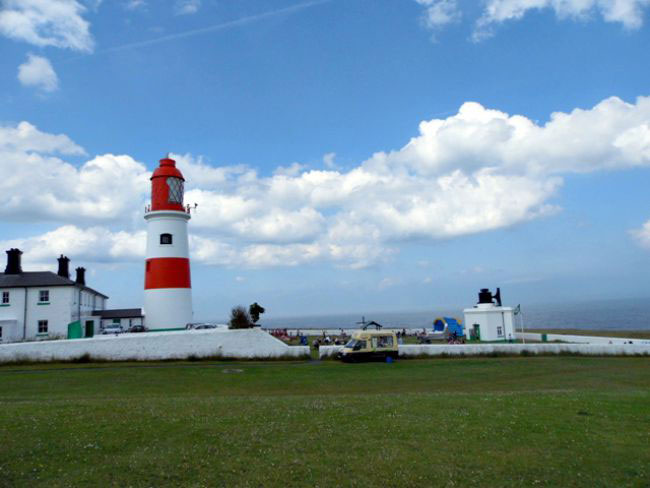 National Trust members are free. The prices for tickets are £5.80 for an adult £3.15 for a child and £14.00 for a family. Entry to the grounds, shop and cafe are free. You can find more information on the National Trust website

PREVIOUS POST
"Take a tea break with raspberry and pecan scones"
NEXT POST
"Hidden Newcastle: The Literary and Philosophical Society"

14 responses to “A visit to Souter Lighthouse”