As a child one of my favourite books was Frances Hodgson Burnett’s The Secret Garden. The story of two children living in a house on the Yorkshire moors who come together by accident and discover the delights of good food and fresh air. Mary has come from India where she has been spoiled and come to expect everyone to do everything for her. Colin lives in the house and is considered crippled. He has given up on life and stays indoors, a secret in the house. The two children meet and begin their adventures outside, finding a secret garden which they breath life into.

The book delights in good food and while at first Mary is disdainful towards her food, often wasting it, with fresh air she is soon devouring every mouthful. Along with the plants and flowers the children nourish in the garden, we see their appetites growing and they discover the delights of fresh milk, porridge, home made bread and jam and currant buns. Dickon, a child who lives in a small four room cottage nearby befriends the children. The family are not well off, but his mother often sends him out to the garden with a pail of fresh milk and currant buns wrapped in a blue and white napkin for them to share. I suspect these meals were magical, hidden in a secret garden with freshly baked food sitting in the sunshine, they must have been devoured fast.

When I saw that Galina from Chez Maximka and Chris from Cooking Around the World were running a ReadCookEat challenge, I had to join in. The idea is to post a recipe that is based on a book and I decided to make some currant buns for Mary, Colin and Dickon to enjoy in The Secret Garden. I choose to make Chelsea buns as I had never tried these before and they looked lovely. I can see these being unwrapped from that blue and white napkin and devoured.
Devoured they were, by my son. I put them in a tin to keep for later and found that all but three had been eaten. I think fresh air had created a hearty appetite in him and these managed to fill the space in his tummy. I have always been wary of making bread and other things with yeast, but these actually worked really well. I shall definitely be trying more bread style baking in the future. 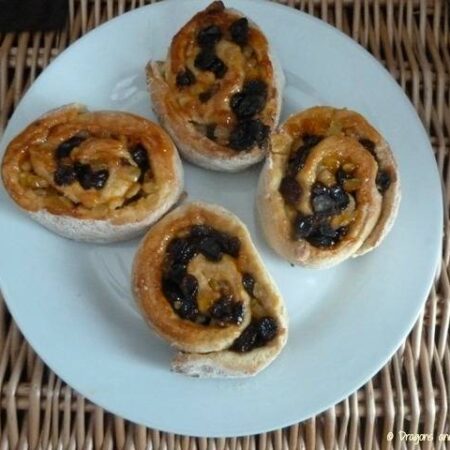 Thanks[email protected] for my cute monkey and the tea. He's