Chocolate rock cakes or rock buns are simple to make and taste delicious. Why not try this delicious twist on a traditional British recipe?

If you are looking for a simple cake recipe, look no further. Chocolate rock cakes are really easy to make but taste amazing. Cook them with your children or just make them for a tea time treat. You will be glad you did. Theses delicious crumbly cakes are deceptively full of flavour.

Rock cakes are a recipe that take me back to Domestic Science or Home Economics lessons at school. The name of the lesson kept changing but it was basically cooking and sewing.

Rock cakes were one of the recipes we learnt to make, easy to make and cook in forty minutes. They are also easy to transport home in a plastic tub to be admired by your parents. There is something restful about rubbing in butter to flour and the addition of the chocolate makes a nice surprise when eating them.

What are traditional British Rock Cakes?

Rock cakes, also known as rock buns are small cakes with a rough surface that look like rocks. They are supposed to have a hard surface but inside they are soft and crumbly and taste wonderful.

Rock cakes are a mix between a scone and a small bun like cake. A simple dough is made into rough looking balls and baked, rather than being rolled out like scones.

The cakes became common during the Second World War. They require fewer eggs and less sugar than ordinary cakes, which was important during the time of strict food rationing. Traditionally  they are fruit cakes but this recipe has a chocolate twist.

Children will also be family with rock buns from the Harry Potter books, where Hagrid’s was exactly like eating a rock. This recipe is for traditional rock cakes which taste amazing and will not damage your dental work!

There is a complete printable recipe further down the page if you scroll down.

These cakes use five main ingredients which are mainly store cupboard staples. You will probably be able to make them from ingredients that you already have in. You will need:

Can I use plain flour to make rock buns?

You can use plain flour but you will need to add some extra ingredients so the cakes will rise. Use 225g plain flour with 2 ½ tsp baking powder and 1 tsp salt. Mix together well.

Add the flour and salt to a bowl with the butter and margarine.

Rub the butter into the flour. Rubbing in is a technique where you use your fingertips to rub the flour and butter together. Lift the mixture up with your hands as you rub it in. This allows the air to pass through to keep the mixture cool. Keep going until the mixture resembles fine breadcrumbs.

If you are using a chocolate bar cut it into small chunks using scissors. This is easier if the chocolate has been in the fridge first. Add the chocolate and sugar to the flour and mix.

Make a well in the centre of the bowl and add the milk, egg and vanilla essence. Mix well until you get a soft dough.

Using two forks dollop the mixture onto the greased baking tray. You should get 12 rock buns. They should be around the same size but don’t need to look pretty.

Bake in the oven for 10-15 minutes until light brown.

Place on a wire rack and leave to cool. They do taste nicest warm from the oven. 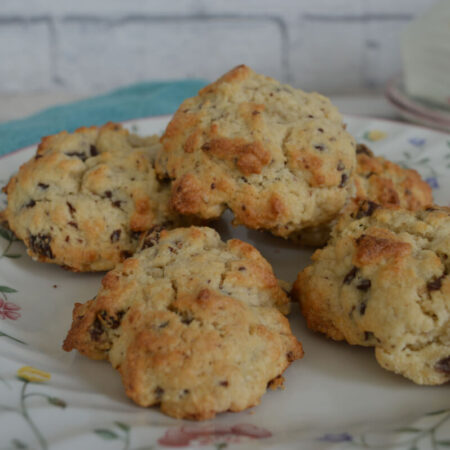 Alison Maclean
Chocolate rock cakes are a really quick and easy cake to make. While they don't look like much they taste amazing. Why not make them with your kids
Print Recipe Pin Recipe
Prep Time 15 mins
Cook Time 15 mins
Course Dessert
Cuisine British
Servings 12 cakes

Chocolate rock cakes are a simple and quick bake to make that are perfect for cooking with children. Instead of chocolate you could use raisins, mixed peel, chopped nuts or cherries Why not add a little flavour by adding a teaspoon of mixed spice?
Keyword cake

Can I freeze  rock cakes

Yes, you can. Simply store them in a freezer bag or tub. Seal and label and then freeze. When you want to eat them you can thaw them at room temperature. Use within 3 months.

How long do they keep?

You can keep rock buns in an airtight container for two or three days, if they last that long!

Why not pin for later: