Butter beans are not something that I tend to use much in cooking. I remember them more from primary school. We used to plant them in a jam jar with wet blotting paper and wait for them to grow. We used to watch fascinated as the root and shoot appeared slowly, making sure we kept the blotting paper moist. I never remember growing a bean stalk, but as a child the possibility of reaching the clouds one day was always present.

I am not sure why I don’t use butter beans more often, they are a mild tasting bean that complements so many flavours. They are also high in fibre so must be good for you. They also make a meal more filling, ideal for my son who at the moment seems to be a bottomless pit when it comes to food. He seems ravenous, always raiding the fridge to see what is there. This appears to be the norm for teenage boys, when his friend is round they both seem to be starving. When I discovered a packet of dried butter beans at the back of the cupboard I decided I had to come up with a good use for them. The outcome was a Chorizo and butter bean stew.

It worked surprisingly well. The paprika flavour of the choizo perfectly complemented the butter beans making a dish that was satisfying and filling. It was perfect for a cold February day when skies were clear and frost was threatening. It was ready when I came in from walking the dog, face red from the cold air and fingers numb. All I had to do was add it to a bowl and enjoy.
February is a time when it is grey outside, Spring has not yet arrived with its bright flowers and sunshine. The bright colours of this dish add colour to the table and make you feel that Spring is on the way.  The dish is surprisingly healthy as well as being low in calories. My son enjoyed it as well, even though it was a little spicy.
The Chorizo and butterbean stew is perfect served with salad or if you prefer a crusty home made bread to mop up the juices. There is something continental about swirling bread around a plate to sop up the last remains of a meal. It reminds me of holidays in France as a child. Bread is not needed however, the meal is filling enough on its own and we were not hungry later.
I used dried butter beans as I had them in the cupboard. This involves some preparation as they are usually soaked overnight. The reason given for soaking is that it reduces cooking time. I like to soak them as when rinsing them afterwards a great deal of dust comes off. If you have tinned butter beans you can use these instead. This would mean that the dish takes less time to prepare. 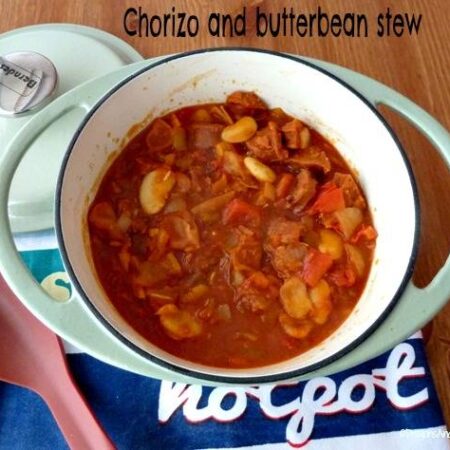 I haven't been into the centre of Newcastle for a

We have a biodiversity area across the road. The c

The other morning I was lucky enough to find this