Newcastle brown ale fruit cake is a lovely moist fruit cake that is easy to make and improves with age. Perfect with a cup of tea.

If you are wondering how to make fruit cake, why not give this Newcastle brown ale fruit cake a try? It is really easy to make and tastes amazing. The brown ale adds a depth of flavour which you are bound to love. It is a rich moist fruit cake that will impress the whole family.

My son was fascinated when I bought a bottle of Newcastle Brown Ale at the weekend. He was reading the back of the bottle and asked my why it was known as “Dog”.  The nickname comes from the euphemism of seeing a man about a dog or talking the dog for a walk, often an excuse to pop into the local pub.

The reason I bought the bottle was to try creating a cake with it. I had been told Guinness makes a lovely cake and I was interested to see if the same could be said of Newcastle Brown Ale. I thought I would make a fruit cake, I know whisky works well in Christmas cake. It also gave me an excuse to use up the dried fruit I have in my cupboard.

My son was highly gleeful when I said I was going to cook with it and said that he was going to be drunk eating whatever I made. I didn’t have the heart to tell him that the alcohol vanishes with the cooking process

What is fruit cake?

Fruit cake is a cake made from dried fruit and nuts. Usually the fruit is soaked in alcohol and spices are added to make a very moist and flavourful cake. Fruit cake has a long history, it has been around since Roman times.

Fruit cake lasts a long time, often becoming better with age. Due to this longevity they were often sent to soldiers in trenches during the war. Traditionally fruit cakes are Christmas cakes or served at weddings.

They were often sent to soldiers in trenches during the war due to this longevity. Fruit cakes are usually served at weddings or at Christmas with marzipan and icing. Traditionally the top tier of the wedding cake should be preserved for a year and consumed on the couple’s first anniversary. Doing this is meant to bring them good luck and prosperity. While fruit cake is great for these special occasions it is also lovely with a cup of tea at any time.

The cake does take a while to make. Most of the time is in the baking, it will take around two and a half hours to cook through. Make sure you have plenty of time before you start. The result is worth it, a rich moist fruit cake with a lovely taste.

Don’t forget to scroll down to get a complete printable recipe.

What is Newcastle Brown Ale?

The breweries are no longer in existence and Newcastle Brown Ale is now made at the John Smith’s Brewery in North Yorkshire. The area where there breweries once stood have become Science Central, where high tech firms and the university campus intermingle. The blue star lives on with a monument marking the site and the Sandman Signature Hotel displaying the star on the outside of the building.

Newcastle brown ale has a distinctive taste, with warm nutty overtones and a caramel fruity character with a sweet aftertaste. It is perfect for adding flavour to this fruitcake

Steps to make the cake

The fruit should be soaked in the brown ale overnight. Weigh out the fruit and add it to large mixing bowl. Pour over the brown ale and cover. Leave till the next day. The fruit will absorb the alcohol and plump up.

When you are ready to make the cake preheat the oven to 180C. Grease the cake tin and line with baking parchment.

Cream the butter and sugar together until fluffy. If the butter has been left at room temperature for a while it makes it easier to mix.

Add the eggs, spices and flour and mix.

Stir in the orange marmalade. If there are any large bits of peel chop them into smaller pieces.

Carefully stir in the soaked fruit with a wooden spoon until it is well mixed in.

Stir in the nuts.

Pour the mixture into the cake tin and smooth the surface. Make a little dip in the centre so that as the cake rises it will stay flat.

Cover the top with a double circle of baking parchment.

Bake for thirty minutes then reduce the temperature to 160C and bake for 1 ½ hours.

Leave to cool in the tin before turning out.

Wrap some brown paper around the outside of the cake before cooking and hold in place with string. This helps protect the cake and stops the outer edge becoming crispy.

How do I know when my cake is cooked?

Before you take your cake out of the oven you want to be sure it is cooked. When it reaches the cooking time have a look through the oven door. If the cake looks like it isn’t ready, don’t open the oven door. This causes the oven temperature to drop and the cake may sink.

If the top looks fully set and the edges are browned and pulling away from the side of the tin, try the finger press test. If you gently press the top of the cake with your finger the cake should spring back.

Finally get a clean metal skewer and insert it into the cake, right to the bottom. When you pull it out you might see cake batter or sticky crumbs on it. This shows the cake needs to cook for longer. When the skewer comes out clean the cake is ready. 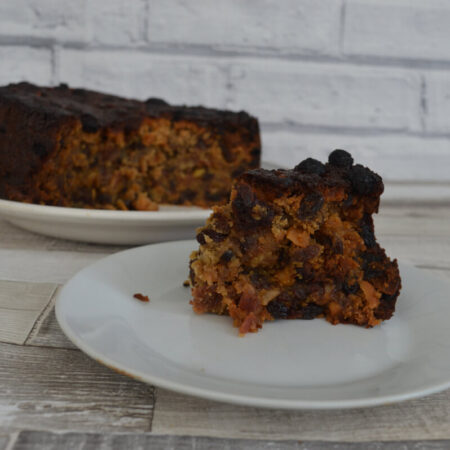 Serve with a cup of tea and five minutes to spend so you can savour it.

How to store the cake

Store a fruit cake in a cool dry place away from sunlight wrapped well in parchment or greaseproof paper and foil. Then place in an airtight container.

Can you freeze fruit cake?

you can freeze them for a later date. Simple wrap them securely in several layers of plastic wrap, place in an airtight container and store in the freezer.

Previous Post: « Learn how to knit during lockdown
Next Post: Tips To Prepare Your Outdoor Space For The Summer »