These Indonesian Pancakes or Kue Dadar Gulung are a delicious sweet pancake. They have a filling of grated coconut, brown sugar and coconut milk which is really tasty. The green colour of the pancakes comes from pandan, a vanilla like plant. Read on to get the recipe.

Discovering recipes and cuisine from different countries is always interesting. Not only do you get a chance to use exotic ingredients, you get a chance to discover new taste combinations. I would love to  travel more and have a list of countries on my “I want to visit there one day” list.

It must be difficult ordering in restaurants when you do not speak the language. Having to pick a dish from a list of exotic sounding dishes, whilst fun, could result in ordering something which is not quite what you expected. We experienced this in France once. My brother has allergies and has to be very careful what he eats. My mum did her best to translate the menu and find something he could eat safely. She found a word she recognised, veal, and ordered the dish for him. A steaming casserole arrived at the table and my brother opened the lid to find it contained brains. Whilst this is considered a delicacy it was not for us. My mum had a job explaining that the menu had been lost in translation. I imagine that ordering food is much harder still in countries like Japan where they do not use our alphabet.

Recently I have been discovering some Indonesian recipes, I already tried making Ayam Areh which was a chicken recipe. It did look a little odd but tasted delicious. This time I tired making Indonesian Pancakes, Kue Dadar Gulung.

Why are Indonesian pancakes green?

I have to admit I was really intrigued by green pancakes, not something I have seen before. The green colour comes from the addition of pandan aroma into the pancake batter. Pandan is a plant found in South East Asia which is used widely because of it’s distinctive sweet smell. It is used to add fragrance to food, in a way similar to vanilla. Used with coconut milk it gives a lot of Indonesian dishes a distinctive taste.

How do you make Indonesian pancakes?

The pancakes are actually made in a similar way to ordinary pancakes. Instead of milk coconut milk is used but otherwise the ingredients are the same, flour, eggs and salt. A teaspoon of pandan aroma is also added to create the distinctive green colour. Having recently made American pancakes I did find that the batter was quite a bit thicker. You need to pop a spoonful in the pan and spread it out with a spatula to get them to be wide enough to roll up. 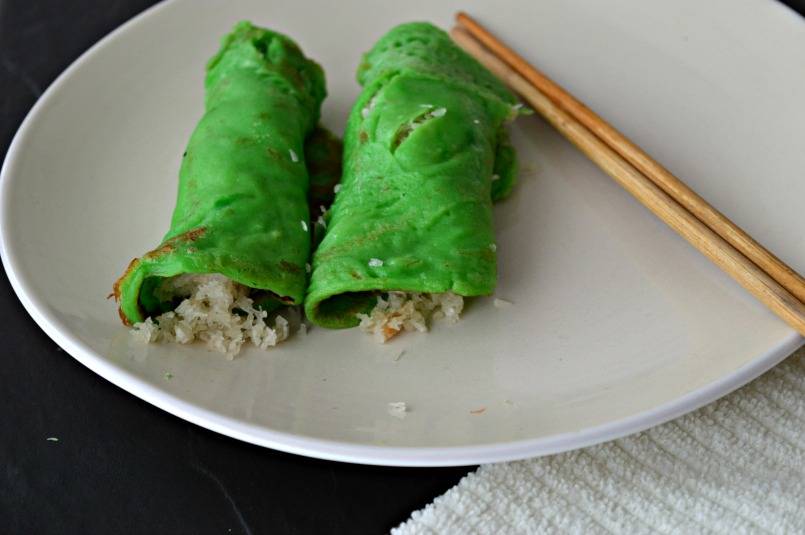 These pancakes also contain a sweet filling. This is made from a mixture of grated coconut, brown sugar and coconut milk heated in a pan until it goes brown in colour. This filling is then placed on the pancake and it is rolled up like a Spring roll. The Kue Dadar Gulung are then ready to eat. I wasn’t sure what they would taste like but they are nice. They are very sweet so you only really need to eat a couple. The Indonesian pancakes do make an unusual dessert, but they do take a bit more effort that normal pancakes.

Have you ever tried any Indonesian food? What did you think?