We’re Going On A Triffid Hunt

Back in 1951 a writer called John Wyndham wrote a book entitled The Day of the Triffids. It is a science fiction book which tells an apocalyptic story. A new genetically modified plant has appeared from nowhere and started growing all over the world. The oil it produces is superior to fish and vegetable oil so as a result it is cultivated and triffid farms appear everywhere. There is only one problem, the plants seem to possess intelligence. They walk about on their roots, appear to communicate with each other and they have a whip like sting that is poisonous that they use to kill their victims. This allows them to feed on the body as it rots. One day an amazing meteor shower is seen in the skies across the world. The next day the population of the earth is blind and a race for survival amongst the triffids ensues. It is a fascinating read and you can easily imagine the scenario occurring today.
I read the book as a child and since then many TV adaptations have been made. My son watched one of the more recent ones with me and was equally fascinated by the story. The other day when we were taking the dog for a walk I told him that I had spotted some triffids on the hills. As you can imagine he was sceptical. We set out on a triffid hunt.

I love the different colours that can be seen everywhere in June. The field is full of yellow, the hedgerows are full of while and the sky was full of blue.

Looking down from above you can see the streak of yellow in the field which makes an interesting contrast with the sky. 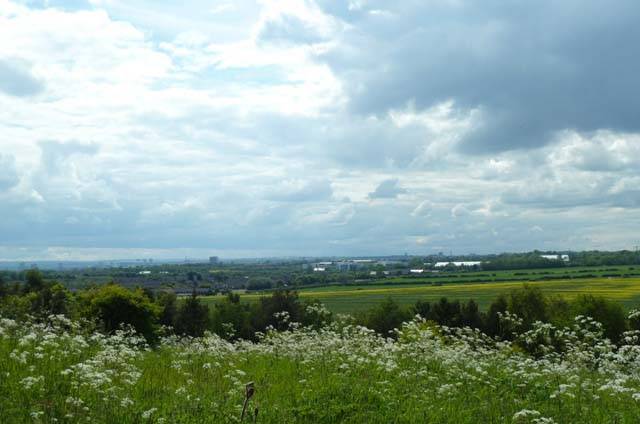 My son was determined to find triffids, I don’t think he believed me. He asked the dog to sniff them out. The dog was too busy trying to keep up.

There are splashes of colour everywhere. We found this purple flower hiding in the grass. It looks like some sort of hyacinth.

The gorse is in full bloom providing splashes of yellow amongst the green.

Wild roses are also blooming, perfuming the air with their scent.

Then lurking in the grass, we found it, a triffid.

Well maybe not really, but it definitely looks like one. I don’t think my son was that impressed but it got us out into the fresh air for a bit.

Read more: A trip to the beach

Dippy the Diplodocus in Newcastle

Dragon Hunting In the Rain

7 responses to “We’re Going On A Triffid Hunt”