Tomorrow is pancake day, or Shrove Tuesday as it is officially known. It marks the start of Lent, a time when many people give up luxuries for forty days. A time which represents the forty days Jesus was meant to have spent in the desert being tempted by the devil before he started his ministry. The ending of Lent brings us to Easter. Pancakes are associated with Shrove Tuesday as a way of using up eggs, sugar and milk before the fasting period begins. I just like to enjoy the pancakes, as does my son.

Recently Clarks Maple Syrup sent me a set of lovely recipes involving pancakes and maple syrup and I had to take the opportunity to try them out. I love maple syrup poured over pancakes with crispy bacon for breakfast. It fills me up for the day and reminds me of holidays in America, when I first learnt about pancakes for breakfast.

These recipes were a bit more adventurous though and looks gorgeous. I asked my family which one we should try and the decision was we should make Cinnamon and Clarks maple syrup pancakes with caramelised pear and pecan brittle. It sounded gorgeous.

I had all the ingredients except for pecans and I was not able to track these down anywhere. I decided I would substitute peanuts instead and this worked really well. The peanut brittle was the hardest part to make. I have never tried heating sugar before and was amazed when it turned into a golden liquid. Make sure you have the pan on a very low heat, once the change starts it happens rapidly and if not removed from the heat immediately it can burn. I got it right after two attempts and the resulting peanut brittle was just right.

The pancakes have a hint of maple syrup and cinnamon which works really nicely with the caramelised pears and their juice. I would definitely recommend trying these pancakes, they are a more luxurious version of the normal flat pancakes served with lemon and sugar. Make the peanut brittle in advance as it takes a while to cool. The pears and pancakes can be prepared at the same time. The pancakes are served in a stack with the pear juice and pears poured over and topped with the peanut brittle. 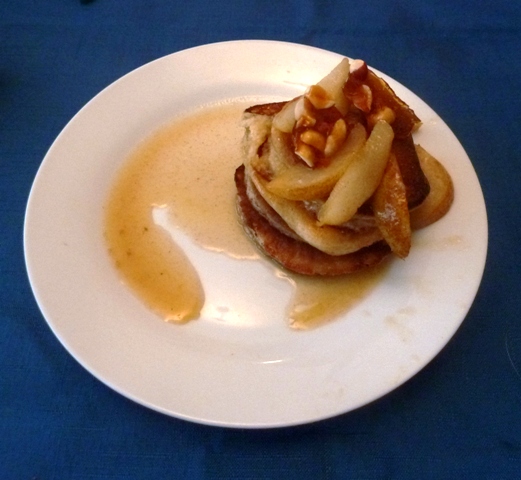 Read more: Pancakes from around the world

Disclosure: I was sent some Clarks maple syrup and some recipes to try out in return for an honest review.