Join my newsletter list to be the first to hear our latest news! Learn More
Home » Recipes » Blackberry and Strawberry One Pot French Toast
Jump to Recipe Print Recipe

Warburtons recently invited me to take part in their Big Red Breakfast Campaign. They have teamed up with the British Heart Foundation (BHF) to educate the nation on the importance of maintaining a healthy balanced diet with plenty of wholemeal to maintain a healthy heart. Warburtons have changed the packaging on their wholemeal loaves to support the BHF’s Wear It Beat It campaign and will donate 5p from every loaf sold to the British Heart Foundation. They are hoping to raise £1 million. To help raise awareness Warburtons sent me a hamper including their wholemeal loaves and challenged me to come up with some recipes. First I tried a savoury recipe, making an Avocado and Ricotta spread which made the ideal toast topping. I then decided to try a sweet recipe and made one pot blackberry and strawberry french toast.

My family adore French toast, there is something about egg and milk soaked bread fried and topped with sugar which is irresistible. Making it in a frying pan can sometimes be a military operation. Only two slices can be made at once and often it can be a hard decision who to feed first. Putting all the ingredients in one big dish and cooking it in the oven means everyone can be served at once. It also means you are not standing over the stove for ages so you can get on with other things. Baking in the oven also makes the dish healthier.

The addition of blackberries and strawberries into the mix is perfect for adding some fruit into your diet and actually complemented the bread perfectly. Lurking under the top layer they mixed into the egg mixture becoming part of the custard. This added a subtle fruity flavour to the whole dish.

The dish becomes better when the egg and milk mixture is left to soak into the bread. To save time in the morning the dish could be prepared the night before and just popped into the oven in the morning. Once everyone is dressed it can be served, making it look like you have made lots of effort.

It is also much more of a treat than a bowl of cereal and will keep you full until lunchtime. The wholemeal bread works really well. Warburtons wholemeal is soft and fluffy and really tasty. 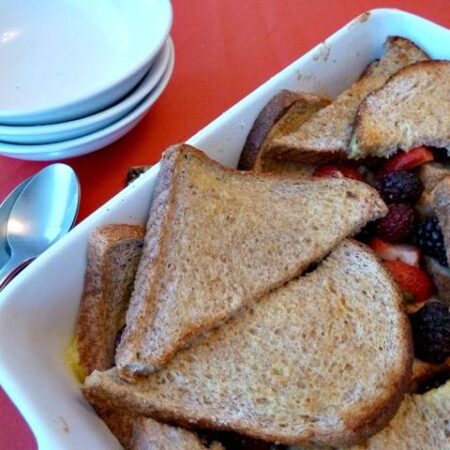 The other morning I was lucky enough to find this